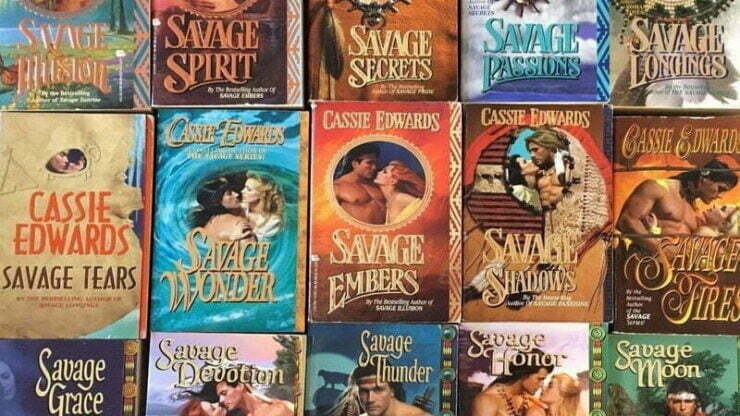 (Originally published 24-April-2009. At that time, unbeknownst to me, Ms. Edwards’ career had – recently, then – been basically ended by plagiarism charges. She published two more novels after this article was written. As Stephen King said, no great loss.)

I’m a reader. I read everything, from the Bible to the Qur’an to the Book of Mormon to Dianetics; from Patricia Cornwell and Nora Roberts/J.D. Robb to Shakespeare, Dickens, Lovecraft, Poe, King, Heinlein, Straub, Bradbury, Nicholas Sparks, John Grisham, Mark Twain…if it’s written down, I’ll read it. I don’t care if it’s a multi-volume novel or the back of a cereal box.

This rather undiscriminating approach led me to discover what may possibly be the worst published writer I have ever read: Cassie Edwards. The fact that this woman gets paid to write is a stunning and mortal indictment of everything the western world stands for. This is the kind of author who makes you think “Jesus, I could be on the USA Today Best Seller list, if this is the criterion!”

I’ve read exactly two of her books. Part of one was called ‘Savage (Something),’ and it bears the distinction of being the first book ever in my life that I just could not finish. It was that bad. Cookie-cutter plot, stereotyped characters that are so poorly-written that you’re not just offended at the racial stereotypes (we’ll get in to those below), but simply at the fact that someone got paid to write this crap.  The other part of one was pretty much the same thing.  And the one in my hand right now.

I’m sure she’s probably a nice lady and all (this is me trying to be too nice. she’s not a nice lady, nice ladies aren’t raging bigots generating billions of dollars in revenue by perpetuating horrible and ignorant stereotypes -jh, 2019) but this woman is to literature what Pauly Shore is to brain surgery. She’s so predictable and cliche that she doesn’t just get one drinking game, she gets a whole party.

Disclaimer: Please Drink Responsibly. I emphatically do not condone or endorse the levels of alcohol you will ingest if you take this game seriously. I mean it. Alcohol kills people. Be careful.

That said…on with the show!

Got something to say? Cancel reply

This site uses Akismet to reduce spam. Learn how your comment data is processed.

You don't have to log in to read the site. Use the form above if you're a member, or the button below if you're a Patron.

Everything helps!  (Tips are not automatically added to site membership & benefits!  Please see the Membership page for more info!)